Harper Collins has announced the official release date for the still untitled final book in the Divergent trilogy! 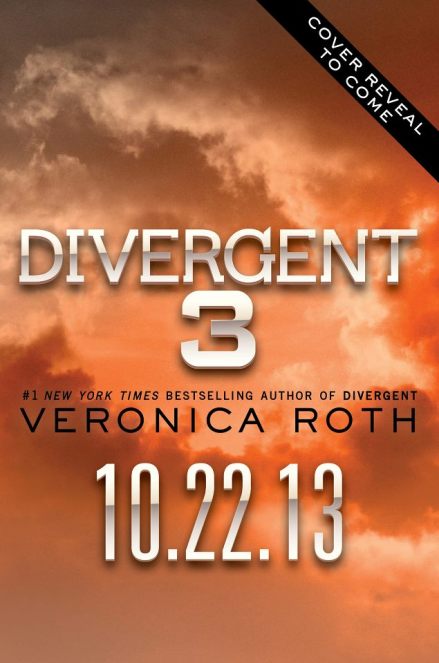 It looks like the final and yet-to-be-unnamed book in the Divergent trilogy is coming along nicely!  Check out the photos Veronica Roth recently revealed on her site ! Definitely looking like a book to me, though I wonder what is being concealed on that top page, a title perhaps?  I really cannot wait to find out what that is! 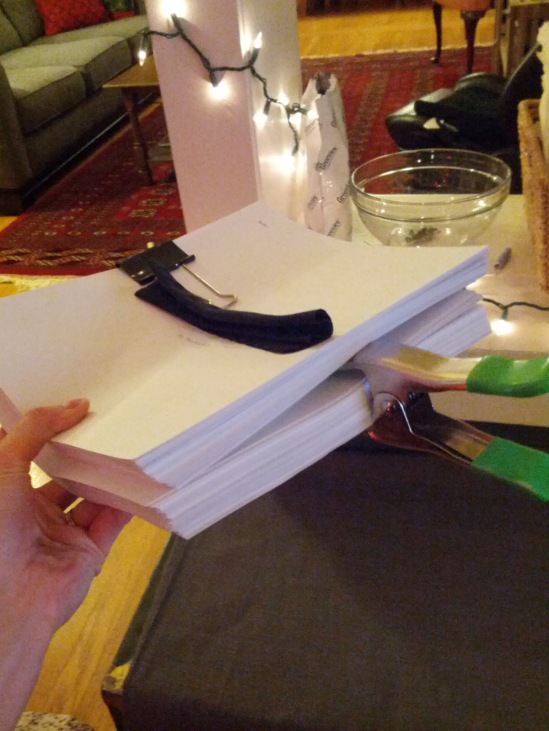 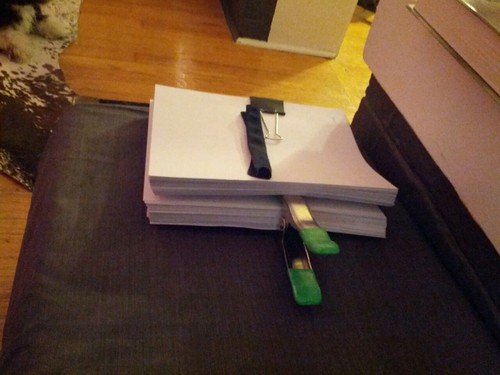 Here’s what she said about the pictures – I kind of love it!

My somewhat-less-rough draft! I’m so irrationally proud of its size that I had to post two pictures. Shh.

Though there has been no official comment from Harper Teen, Goodreads has updated to report that the expected publication date of still Untitled Divergent Book Three!

We might be seeing the third book on September 26, 2013! As always, we’ll try to get this confirmed ASAP! 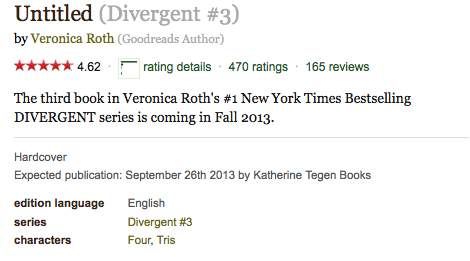 While we all eagerly await the official announcement of the third book in the Divergent trilogy, fans have been getting crafty in order to fill in the gap!

Though Book Three does not officially have a name, many fans are guessing it will be called Convergent, which fits in very well with the title patterns and themes. Thus, we get this awesome fanmade cover from The Readers Heartstring! 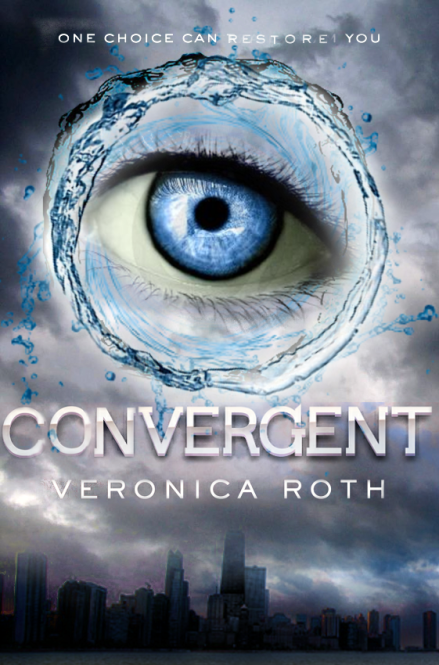 Can you picture the cover to book three looking similar to this? What do you think the title will be?

I always love reading Veronica’s answers to some of the fan’s questions. So much insight!

When does the third book come out?Fall 2013! I don’t have a more specific date yet, and I will announce it when I can.
Is the name of the third book Convergent or Resurgent or Emergent or…?These are the three most common suggestions I receive for titles of book 3, and I can see why! They fit with the rhyme scheme and they could all conceivably relate to the plot of the third book. However, I assure you that me and my publisher still don’t have a title for the third book, and even when we do, I probably won’t be allowed to announce it until much closer to the publication date. (That part of the process always KILLS me, by the way— but that’s just how it works in the publishing industry!)
Are there going to be three books in the series?Yep!
Is there going to be a Divergent movie?Maybe! I sold film rights to Summit Entertainment, which is now Lionsgate. A production company, Red Wagon, and a screenwriter, Evan Daugherty, are signed on to the movie. The plan is to get more people signed on! But movie things move slowly and aren’t always certain, and I’m not too involved with them, so that’s all I know.
Do you know anything about auditions or casting for the movie?Not really— I know neither casting nor auditions are happening at this point in the process. If I ever find out anything about either of those things that I am permitted to discuss publicly, I will definitely do so here and on my blog. 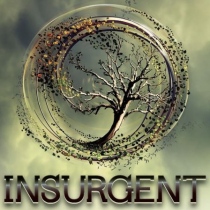 Veronica, you mentioned at your signing in Cincinnati that at times you were concerned about who you’d killed off and who you’d left alive at the end of Divergent. How much of Insurgent’s story arc and/or details were worked out ahead of time as you conceived the trilogy?

Well, I had to construct a book two outline and a considerably less detailed book three summary before I ever got the book contract. So I’ve had the (VERY) general arc planned out from the very beginning. But for me, the best thing I can do with an outline is figure out how to mentally ditch that outline if necessary. So I try to allow everything the freedom to change as it needs to, which means that I both know what’s going to happen and have no freaking idea what’s going to happen. Does that make sense? I hope so.

Considering the process of bringing Divergent to publication (final revisions, copy edits, page passes, ARCs, and launch) in conjunction with the process of writing a new novel, how did you divide your energies and schedule? Was there significant overlap in time and attention spent on each book?

I basically bounced back and forth. There are some authors who are able to work on two things simultaneously, but I am not one of them. If I was touring, or editing book one, I couldn’t even think about book two. But when I was waiting to get edits back, or not traveling for awhile, I tried to get as much of Insurgent done as possible. It didn’t work that well, to be honest. I have trouble flipping the switch on and off so rapidly. I got most of Insurgent done when my book tour was over and I had a long stretch—maybe six months—just to work.

It is said that book and movie trilogies can suffer from The Empire Strikes Back-itis. Having read Insurgent, I can attest that’s not the true in your case. Book two packs as much wallop as book one and keeps the happy reader up all night. What was the easiest thing about writing a second book? What was the hardest?

Well, thank you! (Although, wait, are you suggesting that Empire Strikes Back is a saggy middle movie? Because it’s my favorite one! Darth Vader revelations, anyone? No?) The hardest part about writing book two was that reviews for book one were coming out at around the same time, and that created a lot of internal pressure for me to improve on the things I hadn’t done well in the first book and also to avoid saggy middle book syndrome and also to create something that was consistent with Divergent yet different enough to stand on its own—piece of cake, right? Holy bananas.

It’s hard enough for us, as writers, to ignore that little Inner Editor, but when you start to read reviews, every single one becomes another Inner Editor voice that you have to ignore in order to work. It was very difficult for me to do that. If I can give a little unsolicited advice, I recommend that after you read a few reviews just to get over the excitement of it, do yourself a favor and stop reading them. Trust me—they will find you anyway, so it’s not like you’ll be completely ignorant about what people are saying. The best thing you can do for yourself is to stop seeking them out early on.

The easiest part of writing book two was that I felt like I had learned a lot from the editing process of book 1—I had learned what I was willing to change and what I was not willing to change, I had a very clear vision for how I wanted the book to be, and I felt confident enough in myself to stand by that vision when I had to. That made revising a lot easier—I was able to take in feedback from my agent and my editor, of course, but also to say “no, that’s not how I want it to be” to some things, which I was less willing to do with book one.

(personal note from me: Veronica Roth knows Star Wars and understands that ESB is Boss!)

So, I have to ask about book three in this book two interview. Having come so far in your tale, is it “writing itself” or is each book unique in its plotting and pacing challenges?

I’m sorry, I just almost choked on my tea at the notion of this book “writing itself.” IF ONLY. Each book is different. The first one, the rough draft almost wrote itself. The second one, I just had to write draft after draft after draft until I found the right one. The third one looks like it might be my first “outline book”—I’m not naturally a plotter, but I’ve found it so difficult to wrap my head around everything that’s going on that an outline seems like it might help. The trick is to stay open with your writing process. Don’t just figure out what works for you and stick with it—I mean, certainly do that for as long as it keeps working. But also, remember that “what works for you” will change with every book, or even halfway through whatever book you’re working on. The only trick to writing is to do whatever it takes to keep yourself writing, I think.

You can read the complete post, along with a few more questions, here.