Sam Cushion of UnofficialScore on Youtube has made a Divergent Inspired album!
His album name is “Factionless” which includes songs such as; Divergent, Beatrice, Capture the flag and a whole lot more!

Don’t forget to tell us what you guys think! Do you think this should be the “official” album for Divergent? Share your thoughts!

Pre-order your copy of “Factionless” the fan-made Divergent score here! 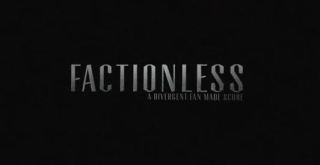 I love this! Haven’t heard Sam Cushion’s amazing Divergent inspired music yet? Well, what are you waiting for? Sam is released his Divergent score, titled “Factionless” on June 19th! I’ve pre-ordered my copy, you should too! You can check out the track list and pre-order your copy here!

Want to listen to a couple of the album’s tracks before you buy? Listen on Sam’s YouTube page!

I always listen to music while I write, and the music selection process can be tricky, because if I can’t find the right song, sometimes it’s hard for me to work, which is not ideal! I don’t pay attention to genre at all—only to what kind of scene it makes me see. Here are a few of the songs I listened to while writing and revising INSURGENT:

Death is at your doorstep And it will steal your innocence But it will not steal your substance.

I don’t think anyone could describe Tris as “innocent” after the things she’s done and seen, but I do think of her as a person of substance, so these lyrics struck me.

There isn’t really a specific part of this song that applies to the book, but I listened to it during quite a few action sequences while writing the book, so the general feeling is right.

I believe this qualifies as a Dauntless-on-the-verge-of-war song.

4. “The Catalyst” by Linkin Park

This one sort of surprised me, because I heard it randomly one day and just stopped in the middle of what I was doing, because it captured the situation of Insurgent so perfectly—a group of people who Tris calls “creatures of loss,” facing an enemy they don’t feel strong enough to defeat.

5. “Under the Waves” by Pendulum

I am deep in a river Waves above my head Held with no spirit We descend We reach the end.

There are a lot of moments in INSURGENT in which Tris feels overwhelmed. This song is good for that sort of thing.

What do you think?  Veronica Roth definitely has good taste in music!

There’s a reason why we keep posting this guy’s music on the site, and it’s not because he helped with the site!  It’s because his music is so good!

Some of the extras in the Divergent Paperback include Veronica Roth’s playlist for the book!

1.“Starts With One” by Shiny Toy Guns

This song gets me in touch with the good aspects of Beatrice’s chosen faction.

And this song gets me in touch with the bad aspects of Beatrice’s chosen faction.

This is the love interest’s song for Beatrice.

And this is Beatrice’s song for the love interest.

This might as well be the theme song for Beatrice’s chosen faction—it’s what they would choose for themselves.

This is the “riding on trains” song.

8. “Running Up That Hill” by Placebo

The tone of this song matches the tone of much of the book, for me.

I was listening to this song when the first scene I wrote (in chapter 6) popped into my head. That scene led me to the world of the book and its basic plot.

A powerful song that’s perfect for chapters 38 and 39.